Intervention
I started to get creative and observe him in different scenarioes of the prison I called home. I watched his facial expressions, gestures and body language. I listened to where he emphasized words and syallables when speaking in the company of others.
I watched  the charming, witty, street-smart, savvy and compassionate "hero" hang up that hat and transform to a creepy, ugly, relentless slave driver who spat on his prized possession, kicked it and raped it.
Amazing that such an extreme array of emotion, anger, pride, love, and hatred could be contained in one disgusting human sack of flesh.
While at work, I had to worry about stupid stuff like how good or not he slept, who called, what mail we received, if he had enough beer and cigarettes to get him thur the day until I got home, if I had his clothes laid out for him, if there was his preferred thicker towels to dry his lame ass…
God forbid if anyone woke up while he watched his “movies.”  During the day, he would flip between The Learning Channel, Jerry Springer and on-demand porn, which all ended up funneling fuel against me somehow… interrogating me on a whim and a twelve-pack-if I was cheating, not paying bills, being anything less than perfect.
When the kids started to stand up for themselves as teens, he tried maintaining control. He tried to keep them contained in their rooms. He ran them ragged pampering him, cutting the lawn, cleaning his tools, scrubbing the bathroom while I was at work and they were not allowed to breathe a word to Mom.  He got so paranoid that he tried keeping me from the kids when I got home from work by keeping me engaged in conversation, over-dramatized updates about nothing such as who walked by the house at what time, while drinking beer after beer or driving him to get vodka-he tried to demand their respect.  It doesn’t work that way, especially when he can’t speak straight.
Sure, you might be able to force someone to act a certain way, but it doesn’t mean you are respected.  It means you are a power hungry coward. Respect must be earned.
We learn to numb ourselves until it’s over. We learn to leave our bodies when it’s being violated. We learn to zone out when being called their favorite four-letter words. We learn that the well of tears eventually runs dry.
One of the ways I coped when I saw things unravel and knew he was about to sink me into a fighting episode:  I would sneak to a phone and call one of his friends and ask them to please just call or better yet, come over.
I never once said, "He is hitting me," or anything to that nature.  Rather, I would say, "He’s being an ass."  I don’t think they ever knew how bad it was. Inside, I felt guilty for being in the predicament but I needed intervention NOW, at that instant.  Two-thirds of the time the party I contacted  would be able to randomly call or show up and I viewed it as being "saved by the bell."  I really should thank those neighbors and family members.  It saved me from a beating, rape or sodomy that segment of the day.
Afraid to leave and afraid to return.  That’s an article in and of itself.  Just to get through each part of the day was a skill.  I found that if I ran out of mascara, he was aggressive.  I experimented so far as trying to tell him that I had run out-versus running out and not telling him-whenever I did not have mascara on, he was abusive. If I wore red, if I made a certain facial expression, if I walked by the heat vent and my hair blew, I was insulted…“Don't think you look pretty!” ...and another big one, “You look pretty when you cry.”
WHAT?!
Was I that far gone to tolerate this?  No.  It was years of conditioning.  Apologizing, his fake crying, his promises to seek help if it ever happened again, empty promises, lies and lies.
If you can leave, you’d better not go back, because it will be worse after the honeymoon.
Not only am I lucky enough to be here to share my story, but have supported many others – men and women – I can accurately and confidently tell you, my fellow readers: If you leave, don’t believe the promises that the abusive or “bad” side will suddenly fly away, it’s a fallacy.  A farce.  A lie.  They look and sound so helpless, so sentimental, so sincere, it’s nothing more than a trap.
October 16th will mark the fourth year anniversary of having him arrested.  Of course, the laws don’t protect me (he was only held overnight) so, I am in effect a sitting duck.  But to live in fear is no longer an option for me.  I’ve served enough time as a punching bag, a doormat, a sex doll.  Do I forgive?  Hell no.  And I won’t forget either.  But I accept it happened and will now pick up and move on and churn that ugliness until it shines with good.  How do you think pearls are formed?
To take your reins takes every ounce of energy in your being.  I never thought in a million years that I would have survived that relationship.  I live and live proudly, because I made it and you can, too.  Believe in you.
Every body is somebody.  You are all special, important, worth while and worthy of love.
Take your reins my friends, live and love, starting with yourself!
Thank you Matt, Brian, Danny, Tipper, Joanne and Jamo. 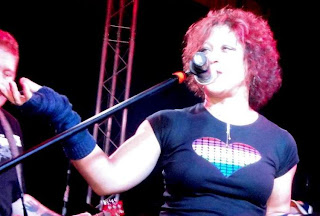 Article written by Suzanne Perry.
Posted by Compassion Fashion at 8:51 AM